Jericalla is a Mexican custard dessert from the city of Guadalajara, Mexico.

When you think of traditional Mexican desserts, most people are familiar with Flan. However where my husband is from, Guadalajara México, there is a variation of this dessert called Jericalla.

What is a Jericalla?

Jericalla is a Mexican custard dessert made with just a few ingredients. It has a custard like texture similar to flan, and a burned top like crème brûlée. However there isn’t a sugar topping, so you won’t get a hard shell.

You’ll find this dessert all over Guadalajara from street cart vendors to restaurants. I had made Jericallas before going to Mexico, and once I tasted the ones there, the taste was spot on.

The ingredients to make Jericallas are easily accessible and you probably have most of them in your kitchen.

The color of the Jericallas is darker with the Oat milk and the browning isn’t as spotty as the whole milk version. It’s also a little more denser, but honestly I thought it still tasted delicious.

Sugar- Plain white sugar is what you’ll need. I haven’t tried any natural sweeteners or sugar substitutes with this recipe, so I can’t offer any advice.

Vanilla Extract- Preferable Mexican vanilla, since again the flavor is stronger. However regular Vanilla will work too.

Eggs- Some recipes call for just egg yolks, but I try to avoid separating eggs, and using the whole egg works in this recipe.

How to make the Custard

Start by bringing the milk, sugar, cinnamon, and vanilla to boil. Then immediately remove from the heat and let it cool for 30 minutes.

We need the milk mixture to cool down so when combined with the eggs, they don’t start cooking or curdling.

Once the mixture is cool add a few tablespoons to the whisked eggs. Then add the remaining milk mixture to the eggs and whisk until smooth.

Like most custards, Jericallas need to be baked in a water bath. This prevents the custard from getting rubbery or cracking at the top.

A water batch is simply a baking dish filled halfway with water and the ramekins placed inside. Just make sure once you place the ramekins in the water, they only reach halfway up the sides.

Baking Time for Jericallas with Whole Milk is 30 Minutes + 4 Min under the broiler.

Baking time for Jericallas with Oat Milk is 45 Minutes + 4 Min under the broiler.

You want the middle to be set or when a toothpick inserted comes out clean.

Can Jericallas be made ahead of time?

Absolutely! They actually require to be made ahead of time, since they will need to cool in the refrigerator for a few hours. They are best served after they’ve had some time to chill and firm up.

I recommend making them and refrigerating overnight or up to 3 days in advance. When storing in the fridge, just wap with some plastic wrap over the top or store in a large container with a lid.

In Guadalajara, Jericallas are served right in the cup they were baked in. So unlike flan you don’t need to take it out of the ramekin. It’s not traditional to serve with berries or fruit, but I like the little pop of color that it gives.

Enjoy them anyway you like! The are they perfect sweet ending to any Mexican meal. 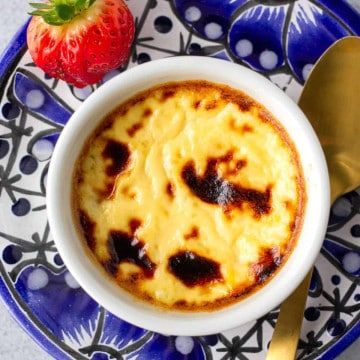 If you plan on storing the Jericallas longer than 2 hours in the refrigerator, place ramekins in a container with a lid, or wrap them in plastic wrap and store for up to 3 days. Check out these Mexican Dessert Recipes: Conchas Chocoflan Apple Empanadas

Keyword Jericalla, Jericallas
Tried this recipe?CLICK HERE To Tell Us!