A Twist on Pecan Pie using Mexican chocolate and agave for a pie that's less sweet but has warm notes of cinnamon and chocolate.

I have to be honest, I use to hate Pecan Pie. Growing up in Texas, the pecan pies I tasted were overly sweet and had a gelatin like filling that I did not find appetizing.

It wasn't until I made my own version of Pecan Pie with Chocolate that I converted to absolutely loving Pecan Pie!

The original version of this recipe posted in 2018, was made with the popular mexican chocolate, Abuelita. However I wanted to make sure this pie can be made with chocolate chips and cinnamon to mimic the taste of the Abuelita chocolate.

The recipe is delicious with both types of chocolate, so feel free to use whichever one you prefer!

Chocolate- As I mentioned I originally made this recipe with 1 Disc of Abuelita Mexican Chocolate. If using this, be sure to break up the disc to allow it to melt easily.

Or you can use Chocolate chips with cinnamon. I used semi sweet chocolate chips, but if you prefer milk or dark chocolate, those would work too.

Butter- If you need this to be dairy free, then substitute a Vegan butter.

Pie Crust- I used a store bought pie crust but you could use a homemade pie dough, or even a gluten free crust if you need it to be gluten free. Press it into a 9 in pie baking dish.

Agave- I like the taste of agave in this recipe, but maple syrup or honey can be substituted.

Vanilla- I used a vanilla bean paste that got from Trader Joes. The taste is stronger and you have flecks of vanilla bean. I've also made this recipe with regular vanilla extract too.

Cinnamon Whipped Cream- I wanted to carry the notes of cinnamon into a homemade whipped cream. To make this dairy free, use a chilled can of coconut milk and whip just the cream part along with sugar and vanilla.

Of course you can use store bought whipped cream, and add a dash of cinnamon 🙂

Serving and Storing the Pie

Once the pie is done baking, allow it to cool before serving. At least 30 minutes. You can keep the pie out for a couple hours, if you plan on serving it later in the day.

Make Ahead- The pie can be made a day or two ahead and stored wrapped in the fridge. You can either serve it cold, or warm it slightly in the oven for about 15 minutes.

Freeze- If you happen to have leftovers, the chocolate pecan pie can be wrapped and frozen up to 3 months. We actually did this last year and it was still delicious. Just be sure to wrap the pie in plastic wrap then place in an freezer safe bag and remove any air. 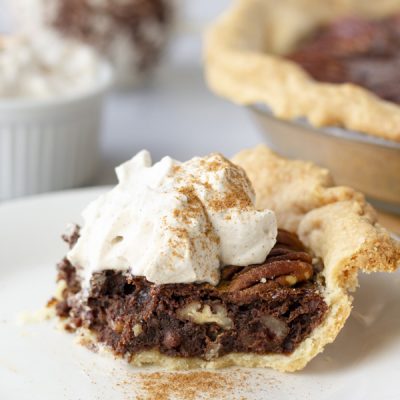