Sopa de Lentejas is a Mexican Lentil Soup with potatoes, cilantro, and a tomato based broth. It's meatless and can be made Vegan with vegetable broth.

Similar to Fideo, Sopa de lentejas is an easy and affordable soup to make. However with lentils you will get more fiber, protein, and iron as opposed to just the fideo noodles.

This recipe is how my Mother in law makes lentejas, but there's quite a few variations that also add diced veggies like carrots and zucchini. She only adds potato but you can definitely add other veggies if you like!

You don't need to soak lentils, however you will need to wash and rinse the dried lentils, and make sure there are no foreign pieces.

Lentils will cook in about 25 minutes of boiling, however if the lentils are older they may take longer to cook. So keep that in mind when timing the soup.

Soaking the lentils does cut down on cooking time and I've heard can make them easier to digest. But I cannot verify this.

This recipe uses 1 cup of lentils and they will double in size as they cook. On the recipe card you can adjust the serving size to make a larger batch of soup.

This tomato based mixture is used in a variety of other recipes like Sopa de Fideo, Albondigas, and Mexican Rice.

Just place halved roma tomatoes, half of a small white onion, or quarter of a large onion, 1 garlic clove, and 1 cup of broth. Blend for 30 seconds or until smooth.

Give it a quick taste to see if any additional salt is needed.

How to make Sopa De Lentejas

This is a great soup to make for the week and have as a light meal or side dish.

Once the lentils are rinsed and sorted, place them in medium to large pot with a lid. Add 4 cups of chicken or vegetable broth, or you can use water and bouillon.

It's important to use a good quality broth for flavor. This is where all the seasoning will come from. In the video below I use Chicken bone broth for even more immune boosting properties.

Bring to a boil and reduce heat to medium and boil for 10 minutes.

While the lentils are boiling, peel and dice a large russet potato into even small pieces. Then make the tomato based sauce.

Add the potatoes, sauce, and a handful of whole cilantro to the boiling lentils. Continue cooking for 15 minutes or until the lentils and potatoes are soft. Serve with hot sauce for some spice, fresh cilantro, and a squeeze of lime.

Can you Freeze Lentil Soup?

Absolutely! Portion out leftovers into freezer safe bags once the soup has cooled. I like to do 2 portions at a time and freeze up to 2-3 months.

To thaw, place in the refrigerator overnight, or place the frozen bag in cool water for 20 minutes. Then empty contents into a pot and simmer over low to medium heat.

The lentils will expand after cooking, if the soup is too thick then add more water or broth, and additional salt if needed. 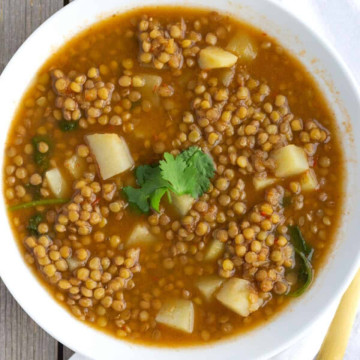 The seasoning of the soup will depend on the brand of stock or broth you are using. Always taste before serving.  To Freeze, portion out leftovers into freezer safe bags once the soup has cooled. I like to do 2 portions at a time and freeze up to 2-3 months. More Mexican Soups: Fideo Albondigas Caldo de Pollo Carne en su Jugo