Sopa de Fideo is a Mexican Noodle Soup that's made with a tomato based broth and can easily be adapted to be Vegan.

This simple yet flavorful soup is a staple in Mexican families because it's Easy, Quick, and Affordable.

My mother in law makes fideo often because my kids love it, and it can also serve as a 'caldo' to extend a meal. A.K.A a filler that's really affordable.

The soup is traditionally made with chicken bouillon, but I used Chicken broth or Vegetable broth to make it Vegan. You can also top fideo with queso fresco, avocado, or garbanzo beans like my mother in law does.

How to Make Sopa de Fideo

Blended Tomato Sauce- This is the base for the soup and it couldn't be easier! Just add sliced tomatoes, onion, garlic, and chicken stock to a blender.

This is the same mixture that is used for my Albondigas and Lentejas Recipe.

Toasted Noodles- Fideo is made with small vermicelli noodles which you can find at most grocery stores. They key to developing flavor is to toast the noodles in oil till they get some color. This same method is used to make Mexican Rice as well.

Once the noodles are toasted, the tomato mixture gets added in, and a few more cups of broth. Bring to a gentle boil and 10 minutes later a you have a warm comforting bowl of fideo.

Fideo is best served right away, but if you do plan to refrigerate it, keep in mind the noodles will expand. Just add some water when reheating to help thin out the soup. 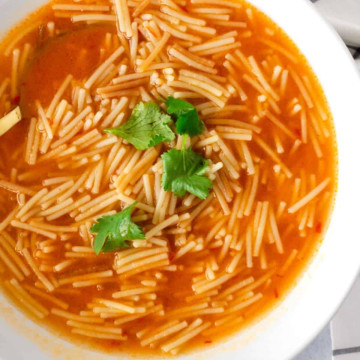 Renee Fuentes
Sopa de Fideo is a Mexican Noodle Soup that's made with a tomato based broth and can easily be adapted to be Vegan.
Print Recipe Pin Recipe
Prep Time 5 mins
Cook Time 15 mins
Servings 6

Fideo is best served immediately, however it can be reheated. The noodles will expand, but you can add some water to thin out the soup.

Keyword Fideo
Tried this recipe?CLICK HERE To Tell Us!

As an Amazon Associate I earn from qualifying purchases.