Carne en su jugo translates to 'Meat in its juices', and is a popular dish in Guadalajara, MX. The result is a simple yet flavorful bowl of beef and broth.

Carne en su jugo can be described as a cross between a soup and a stew.  It's served with whole beans and ends up being a pretty filling meal. My mother in law makes this dish often, and once I saw how easy it is, I was excited to try it on my own.

I was able to find all the ingredients at my local grocery store. The only unique ingredient is the tomatillos, but most stores carry them. I used a beef round roast and sliced it into small dices, this was the most time consuming part. Then cut the bacon into similar size pieces as the beef. Tomatillos have a waxy residue once peeled, so be sure to wash well.

Everything gets cooked together in one pot, except for the beans. You can either use canned beans for serving or my recipe for Instant Pot Beans. I tried to do a few process shots to give you a better idea on how to make carne en su jugo.  First, you cook the bacon in a large pot or dutch oven, and add the green onions whole and saute in the bacon grease. I know it sounds weird, but you won't eat the onions, it's just for flavor.

Next, add the diced beef into the same pot with the bacon and the green onions. Cook the beef in all that glorious bacon fat. I added just a bit of salt and pepper to the beef, because the bacon has a lot of salt. Once the beef is cooked, add cilantro stems whole. Again, we won't eat this cilantro it's just for flavor.

For the tomatillo sauce, place tomatillos and water in a blender and puree till smooth. Then add the sauce to the cooked meat and a little bit more water. Now the soup is ready to simmer. The beef is already cooked, so the simmering is just to develop flavor in the broth. Around 15-20 minutes of a low boil is all it needs.

Remove the stems of cilantro and green onion from the soup and discard. Taste the broth for seasoning and add salt/pepper if needed. To serve, place a few spoonfuls of beans in a bowl and add the carne en su jugo. Top with chopped cilantro and warm tortillas.

I'm excited to pass down this family recipe and I hope you enjoy too!

Try these other traditional Mexican Soups:

When you make this recipe, please leave a Star Rating and Review below, I appreciate it! 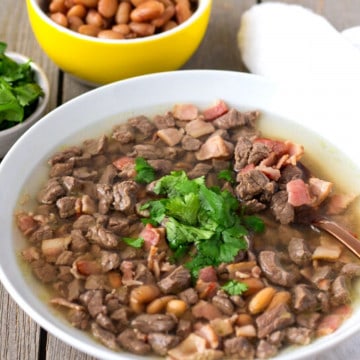 You can either use canned whole beans or this recipe for Instant Pot Beans. The broth will have some separation when it sits, that's normal. Just stir well before serving into bowls.
Keyword Beef Soup, Carne en su Jugo, Mexican Stew

As an Amazon associate, I earn from qualifying purchases.