Empanadas are essentially the Latin American version of a hand pie. Similarly they can be filled with Sweet or Savory flavor combinations.

I was able to get together with a foodie friend who just happens to live down the street from me! Her name is Belqui and her Food Blog is Belqui's Twist. Be sure to check out her Delicious Empanada Recipe!

We had so much fun making this YouTube video on Dessert Empanadas. Click on the image below to watch the episode and see what filling option Belqui uses for her empanadas!

How to Make Apple Empanadas

Apples- I used a combination of Honeycrisp and Granny Smith apples. I like the flavor you get from combining sweet and tart apples. Peel and dice the apples and place them in a skillet.

You want to cook the apples until all the liquid evaporates and the apples have softened. The consistency should be soft and sticky. Allow the filling to cool before assembling the apple empanadas.

You can also make this filling ahead of time and store in the fridge for a couple of days.

Pie Dough- If using a refrigerated pie crust, take it out at least 30 minutes before you plan on making the empanadas.

If using a frozen pie crust, allow it to thaw overnight in the fridge, then take it out on the counter for 30 minutes before making.

How To Fold The Empanadas

Unfold the pie crust and using a glass or small bowl, 3 in diameter, cut circles in the pie crust. They should be close together, and once you run out of room, remove the cut circles. Roll the leftover dough back into a ball and roll it out flat to repeat the process.

You should get about 9 discs from 1 standard pie crust. Now roll out each disc till it almost doubles in size, 6 in. You want the dough to be as thin as possible since it will puff up during baking.

Now fill each rolled out dough disc with 2 heaping tablespoons of the apple filling. Enough to fill the middle, but leaving some room on the sides.

Once the filling is added fold the bottom over to meet the top and either crimp the edges with a fork or make a seal by folding the edges over. It doesn't have to be perfect! Just needs to be sealed.

Once all your apple empanadas are filled and sealed, you want to cut small slits on the top to allow some venting during the baking process.

The last step is to brush the empanadas with an egg wash to create a nice golden crust on the outside. Simple beat 1 whole egg or egg yolk with 1 tablespoon of water until smooth. Then brush over the tops of each empanda.

Bake at 350°F for 25 minutes, or until golden brown. Remove the empanadas from the oven and allow them to cool on the baking sheet for at least 5 minutes.

The apple empanadas can be served warm or allow them to rest and serve at room temperature.

Be sure to check out the YouTube video on Dessert Empanadas, and you can find the full recipe for Belqui's Pumpkin Empanadas Here. 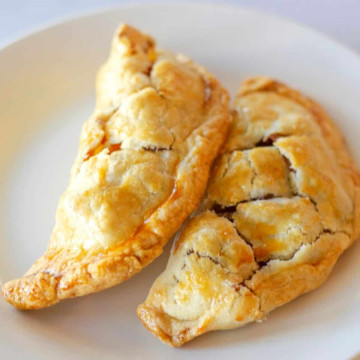