Torta Ahogada is an iconic sandwich from the city of Guadalajara. It consists of a carnitas sub sandwich smothered in a tomato sauce.

This popular Mexican drowned sandwich can be found all around Guadalajara, MX. Similar to the popularity of Carne en su Jugo or Chilaquiles, you'll find restaurants that specialize in these specific dishes.

Here's where we had Tortas Ahogadas in Guadalajara:

What is a Torta Ahogada?

According to Serious Eats, Tortas Ahogadas date back to the early 1900's, and came about as a mistake. A customer wanted some extra salsa on the their torta, but the employee accidently dropped the whole sandwich in the salsa, 'drowning it'. The customer still ate it and said it was delicious!

Since the sandwich is being drowned in sauce, a sturdy bread is needed so it doesn't fall apart. Birote salado is what they use in Mexico, which is similar to a sourdough baguette or a crusty French baguette. Make sure to toast the baguette prior to assembling the torta.

Traditionally tortas ahogadas are made with carnitas, however the recipe I'm making will use pork tenderloin. I'll also be adding refried beans to the sandwich, which the original one did not have, but it's common now to have the addition of beans in the sandwich.

How to Make the Salsa

The salsa for Tortas Ahogadas is where you'll find some differences. Some recipes will make the drowning sauce spicy, however the recipe I'm sharing is a mild tomato and onion sauce along with a spicy salsa to add to your liking.

This is my mother in law's recipe and I love the simplicity of it. Just boil roma tomatoes until they soften, then add to a blender with some salt. The blended tomatoes are poured over thinly sliced white onions and the heat will soften them.

The spicy salsa is made with chile de arbol and garlic, and gives a nice kick to the sandwich. I like to add the spicy salsa on the pork, but it can be added on top as well.

How to make the Pork

Traditionally Tortas Ahogadas are made with carnitas, however I'll be using pork tenderloin and cooking it in the instant pot. I just love how hands off this method is, and results in a tender shredded pork.

The pork is cooked with some garlic, onion, bay leaf, and California or Guajillo chilis. Once done remove the pork from the pot and shred with 2 forks.

It turns out so tender and juicy! Save the cooking liquid to keep the meat moist or use the broth in another recipe.

Start by slicing and toasting the baguette. I used a store bought partially baked French baguette and finished baking it right before assembling. This was pretty close to the birote salado that you'll find in Mexico.

Then add a layer of refried beans to each side of the bread. This will be our 'glue' to hold the pork. Add a generous layer of pork and some of the spicy salsa to your liking.

Close the sandwich together and ladle on the tomato and onion sauce all over the top. You can add more spicy salsa on top too, I just prefer it on the inside so my lips don't burn.

What's the proper way to eat a Torta Ahogada? With your hands and lots of napkins! This sandwich is messy, but it's meant to be enjoyed that way. So dig in and just wash your hands before and after lol.

Leftovers can be stored in separate containers, then assemble when you are ready to re-heat and eat. The tomato sauce can be refrigerated for 3 days and the spicy salsa and pork up to 5 days. 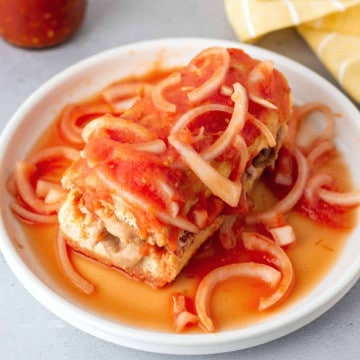 Recipe for Peruvian Beans Leftovers can be stored in separate containers, then assemble when you are ready to re-heat and eat. The tomato sauce can be refrigerated for 3 days and the spicy salsa and pork up to 5 days. More Jalisco Recipes: Carne en su Jugo Chilaquiles Jericalla