An easy and aromatic Thai style marinade makes these chicken wings juicy and flavorful. Cook them over indirect heat on a grill for the perfect bite.

Grilled chicken in Thai is called Gai Yang, and traditionally served as a whole chicken. However in Thailand the chickens are much smaller than the ones here.

My Mom adapted her Gai Yang marinade to use on chicken wings instead since they are easier to work with and more convenient for people to just grab a wing. Thus making these a great party appetizer or snack.

We are making a simple and aromatic marinade for the wings, and it consists of 4 ingredients.

Like any recipe, you'll find variations of a Gai Yang marinade, but this is my Mom's way to get a flavorful chicken wing without much fuss.

The marinade starts with pulsing garlic and whole cilantro in a food chopper or processor until finely chopped. We're using the stems and leaves of the cilantro, because most of the flavor is actually in the stems.

Next we're adding soy sauce and oyster sauce for saltiness and subtle sweetness.

How to Grill Wings

The key to perfectly grilled wings that don't taste burned is to use Indirect Heat. You do not want to use high heat because the outside will be burned and the inside uncooked.

We use a ceramic charcoal grill or Kamado, and place a heat deflector on the bottom of the grill. The temperature of the grill is at 350 degrees.

If you are using a gas grill then only turn one of the burners and place the wings on the non-burner side.

The first side will cook for 30 minutes, then flip each wing over and cook for another 15 minutes. The wings will develop a beautiful brown color.

Grilled Thai Chicken Wings can be served as a appetizer or with a meal. We love to eat these with Thai Papaya Salad and Thai Sticky Rice.

The flavors go so well together!

You can also serve the wings with a Thai Sweet Chili dipping sauce for even more flavor. The marinade also works great on Chicken legs, thighs, breast, or even a whole chicken.

For more grilled recipes, check out my recipe for Grilled Thai Burger. 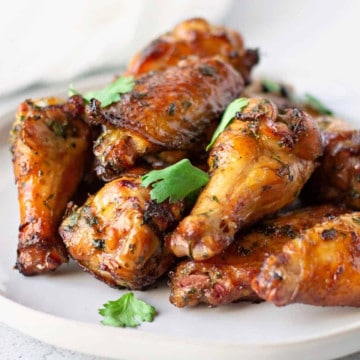 Thai chicken wings can be served as an appetizer or as a meal with Papaya Salad and Sticky Rice. The same marinade can be used on a Whole chicken, legs, or boneless chicken breasts.