These instant pot chicken tamales cook in half the time compared to steaming them on the stove. The filling consists of an easy salsa verde chicken.

I know I'm going to be upsetting some people by making tamales without lard. Tamales, like most time-honored recipes have been passed down from generations and are large part of Mexican family traditions.

Tamales are a common dish eaten during the holidays and can range from savory to sweet. Families make large batches and an assembly type line is helpful to get the process moving quicker.

The recipe I'm sharing with you is for a small batch, but of course can be doubled or tripled as needed.

How to Make Instant Pot Tamales

First, you need an Instant Pot, I'm using the 8 qt model. If you don't have one then the recipe can still be adapted to cook the chicken in a slow cooker or stove top, and steam the tamales on the stovetop.

Second, I mixed the masa in a stand mixer with a paddle attachment. If you don't have one, then try using a handheld mixer or the traditional way of needing it with you hands. Fair warning, this will take you a good 20 minutes of mixing with your hands.

Also, we're making the masa with oil instead of lard. Don't get me wrong, tamales with lard are delicious, but after having masa made with oil for the past few years, I can honestly say that they taste just as good.

The key is to season the masa with a good stock to build the flavor you would normally get with lard.

Third, you need a good flavorful filling. The filling combinations are endless, and can be adapted to what you prefer. For these tamales, I made my 2 Ingredient IP Salsa Chicken. I used salsa verde instead of the red salsa.

I also had some leftover diced potatoes so I added those in as well.

Get a large Pot, place your corn husks in, and cover with hot water. You can also place a pot of water over the stove, bring to a boil, turn off the heat and add the corn husks. Soak them for at least 20 minutes or until soft and pliable.

Remove the husks and lay them out to dry. If the husks are wet, the masa won't stick to it.

Use a cutting board for your work surface. Place a corn husk down, but if it's too small you can overlap 2 together.

Add a few spoons of masa and spread it over the middle of the corn husk.

Now place your filling in the middle of the masa. Fold both sides to meet, then fold it over, and bring the bottom part up.

You can also use shredded pieces of the corn husk to tie the tamale.

Set the timer for Manual, High Pressure 30 minutes. I let the pressure release naturally for a few minutes, then released the remaining pressure.

Remove the tamales from the pot and allow to cool for 15 minutes before serving. The corn husks should remove easily from the tamal.

Cooked/Cooled tamales can be stored in a container or zip-top bag in the refrigerator for a few days or in the freezer for a couple of months.

To reheat, place a damp paper towel over them and microwave for 1-2 minutes until heated through. Keep the corn husk on the tamale while you reheat them to prevent them from drying out, then remove husk before eating.

You can make the masa a day ahead of time and keep it refrigerated. Just remove it from the refrigerator about 30 minutes before making the tamales

How do you reheat frozen tamales?

For individual servings, you can re-heat frozen cooked tamales in the microwave. For a larger serving, re-heat in the instant pot on high pressure for 10 minutes. Check to see if they are warmed through. 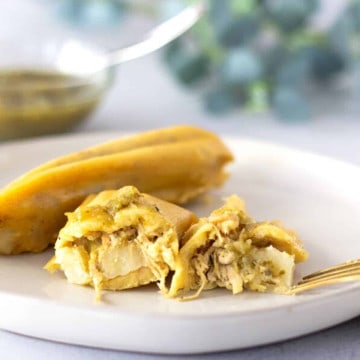 Renee Fuentes
Tamales made easier in the Instant Pot in half the time. Along with masa made with oil instead of lard and a 2 ingredient Salsa Verde Chicken.
Print Recipe Pin Recipe
Prep Time 2 hrs 15 mins
Cook Time 30 mins
Total Time 2 hrs 45 mins
Servings 16 Tamales

Recipe for Salsa Verde Chicken Steamer Method on the Stove:
Place Water in the bottom of a steamer pot with an insert.  Layer tamales standing up and cover with a layer of corn husks and place lid. Bring water to a boil, and lower heat to a gentle boil for at least 1 hour. Periodically check to see that there is still water in the bottom of the pot.
After an hour, remove a tamale from the pot and check if the masa is cooked all the way. It will easily release from the corn husk once it's cooked. If it does not, then continue cooking and check every 15 minutes. Once cooked, remove the tamales from the pot and allow them to cool for 15 minutes before serving.
Once the tamales are completely cooled, leftovers can be stored in a zip-top bag in the refrigerator for 4 days or in the freezer for 3 months. To reheat refrigerated tamales, place a damp paper towel over them and microwave for 1-2 minutes until heated through. Keep the husks on the tamal while you're reheating them.
Beef Tamales
Cheese Tamales