Every year my family looks forward to tamale season, which is around the holidays. This makes sense because tamales are like a present you unwrap to eat.

If you've made tamales before, then you'll understand they can be a labor of love. But if you are making tamales for the first time, this recipe is for you!

This recipe for tamales de rajas con queso, or poblanos and cheese is perfect for a beginner. Here's why:

You can find the ingredients to make tamales at a Hispanic or Latin market. Large chain grocery stores will also have corn husks during the holiday months.

The filling is just 2 ingredients:

Roast whole poblano peppers under the broiler or over a gas flame until they become blistered. Place the peppers in a heat safe bowl and cover with plastic wrap to allow them to steam.

After a few minutes, remove the plastic wrap and peel off the outer skin of the poblano. Remove the stem and all the seeds from the pepper. Slice or tear into strips.

Oaxaca cheese will come either in strips or a ball. If using the ball of Oaxaca, shred the cheese. If using the strips, slice them into small strips like pictured above.

How to Make the Masa

I prefer to mix the masa in a stand mixer with a paddle attachment. If you don't have one, then try using a handheld mixer. The mixer method works well for a small batch.

If you don't have a mixer, then use the traditional method of needing the masa with your hands. Fair warning, this will take you a good 20 minutes of mixing with your hands.

For the mixer method, combine the masa flour, salt, and baking powder. Then add the oil and mix again. With the mixer on low speed, start slowly adding the warm broth.

Once all the broth is added continue mixing for about 10 minutes and scraping down the sides as needed. The masa should be light and fluffy, but still have some structure. It should not be runny.

Taste a little of the masa and add additional salt if needed. The salt addition will depend if you are using a low sodium or regular chicken broth.

Corn husks or hojas, come dried and need to be cleaned and rehydrated before using. Start by picking out any husks that have a lot of spots, and toss those.

Rinse the remaining good husks to remove any dirt or debris. Heat water in a large pot. Once the water is warm, turn off the heat and place the husks in the water.

Push the corn husks down and rotate them to rehydrate. Allow the husks to soak in the water for 10-20 minutes or until they are soft and pliable.

Remove the corn husks from the pot and allow them to dry before assembling the tamales.

How to Assemble the Tamales

Now for the fun part, assembling the tamales. If you're planning on making a larger batch, gather some kitchen helpers to make an assembly line. This is what we do during the holidays to make several dozen tamales.

Get a clean and dried corn husk, or overlap 2 small ones together. Spread an even layer of masa on the top half of the husk.

Add a piece of cheese or layer shredded cheese, and 2 pieces of poblanos.

Fold one side over, then the other side, and fold the bottom part up. Smooth the tamale to distribute the masa evenly.

If the tamale won't stay closed, use a strip of husk to tie around the tamale and hold it in place.

The tamales can be steamed right away, or they can be kept covered in the refrigerator overnight.

How to Cook Tamales in the Instant Pot

I'm using my 8 quart Instant Pot with a steamer basket insert. This method worked much better than when I used the trivet insert in this post.

Add 1 cup of water to the instant pot, then place the steam basket inside. Layer the tamales upright with the opening on top.

I placed the larger tamales around the edge and the smaller ones inside.

Place the lid on and the valve to sealing. Cook at high pressure for 30 minutes. Allow the pressure to release for 10 minutes, then release the remaining pressure.

(Note: In my first recipe I did 20 minutes, but after some feedback and testing additional recipes, 30 minutes seemed better.)

Remove the tamales from the instant pot, and allow them to rest for at least 15 minutes. Very important! The masa needs time to cool and set.

Once the tamales have cooled, the husks should remove easily from the tamal. If the masa is still doughy, then place them back in the instant pot and cook for an additional 5 minutes.

You can make the masa a day ahead of time and keep it refrigerated. Just remove it from the refrigerator about 30 minutes before making the tamales.

Can tamales be made ahead of time?

Yes, and since these tamales do not contain a meat filling, they can be assembled and stored in the refrigerator for 4 days. I don't recommend freezing uncooked tamales, but you can freeze cooked tamales.

How to Serve and Store

Remove the husks before eating the tamal. These tamales de rajas con queso are delicious on their own, or can be served with crema and salsa verde.

I enjoy eating tamales for breakfast with a fried egg on top, so good!

Cooked/Cooled tamales can be stored in a container or zip top bag in the refrigerator for 5 days or in the freezer for a couple of months.

To reheat refrigerated tamales, place a damp paper towel over them and microwave for 1-2 minutes until heated through.

Keep the corn husk on the tamale while you reheat them to prevent them from drying out, then remove husk before eating. 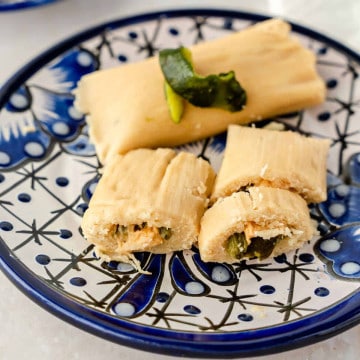 Steamer Method on the Stove:
Place Water in the bottom of a steamer pot with an insert.  Layer tamales standing up and cover with a layer of corn husks and place lid. Bring water to a boil, and lower heat to a gentle boil for at least 1 hour. Periodically check to see that there is still water in the bottom of the pot.
After an hour, remove a tamale from the pot and check if the masa is cooked all the way. It will easily release from the corn husk once it's cooked. If it does not, then continue cooking and check every 15 minutes. Once cooked, remove the tamales from the pot and allow them to cool for 15 minutes before serving.
Once the tamales are completely cooled, leftovers can be stored in a zip-top bag in the refrigerator for 4 days or in the freezer for 3 months. To reheat refrigerated tamales, place a damp paper towel over them and microwave for 1-2 minutes until heated through. Keep the husks on the tamal while you're reheating them.
Beef Tamales
Chicken Tamales