A Dairy Free Mexican Hot Cocoa that packs in cinnamon and chocolate flavors. And if you prefer Milk, I provide dairy instructions too.

You'll notice in the image that the two cups of hot cocoa are different colors. The one up front is the dairy free version that I made with oat milk and looks more chocolatey, and the one behind it is with whole milk.

I wanted to try both versions to make sure the recipe was versatile for dairy and non-dairy milk. The dairy version is creamier and I found needed a little more cocoa powder to bump up the chocolate taste.

What Makes this Hot Cocoa Mexican?

This Mexican hot cocoa is just as easy to make as the 'pre-made' version, but without all the preservatives and ingredients you can't pronounce. You can double the recipe as needed and add in different flavor combos like peppermint extract, or a splash of tequila or Jameson for a boozy version. It will surely warm you up!

I used an extra creamy oat milk for this recipe and it mimics the taste of regular milk pretty well. I've also found that if the dairy free milk has oil then it will help with getting a smooth consistency.

Also keep in mind that if your dairy free milk is sweetened then you'll need less sweetener. Always best to add more later.

Don't skip the toppings! I did a dairy free whipped cream for mine and mini marshmallows for my kids. Garnish with cinnamon sticks, a dusting of cinnamon powder, or chocolate shavings.

Mexican hot cocoa is perfect around the holidays to share with friends and family. And a bonus, your house will smell amazing from the cinnamon and chocolate! 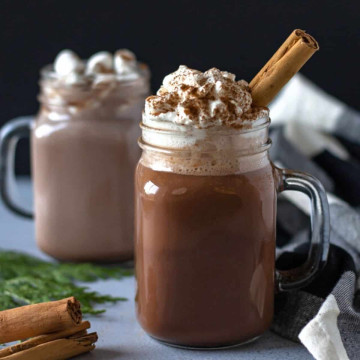 To make multiple batches, simple increase the number on the scale.

Tried this recipe?CLICK HERE To Tell Us!